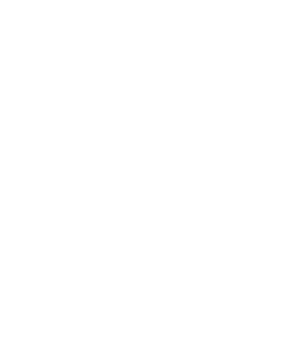 On June 2nd, 1958, Ginger was out to lunch with one of her friends at the Simple Simon Restaurant! Back in the day when restaurants got busy around lunchtime, people would share booths and tables to seat more people, so while Ginger and her friends were eating, the waitress asked if she could sit two people by them. One of those men happened to be George, and the other was his coworker. Nobody thought too much of it at the time. They introduced themselves but didn’t talk too much throughout the meal, so they parted ways at the end of their lunch and continued on their way.

A couple months later, Ginger dropped her mom off at a hair appointment, stopped at a red light, and heard honking. When she looked at the car next to her, who did she see but George waving at her! She waved back as she turned right and he drove straight, but this time something changed. She thought he was “right cute!” His smile lingered in her mind while she tried to recall his name…

She remembered that he’d mentioned he worked at a radio station, so she spent the following weeks flipping through every local radio station she could, until one morning she heard George Brown announcing the local news! She couldn’t believe it! As she listened to him more, she tried to think of ways she could reconnect with this man. 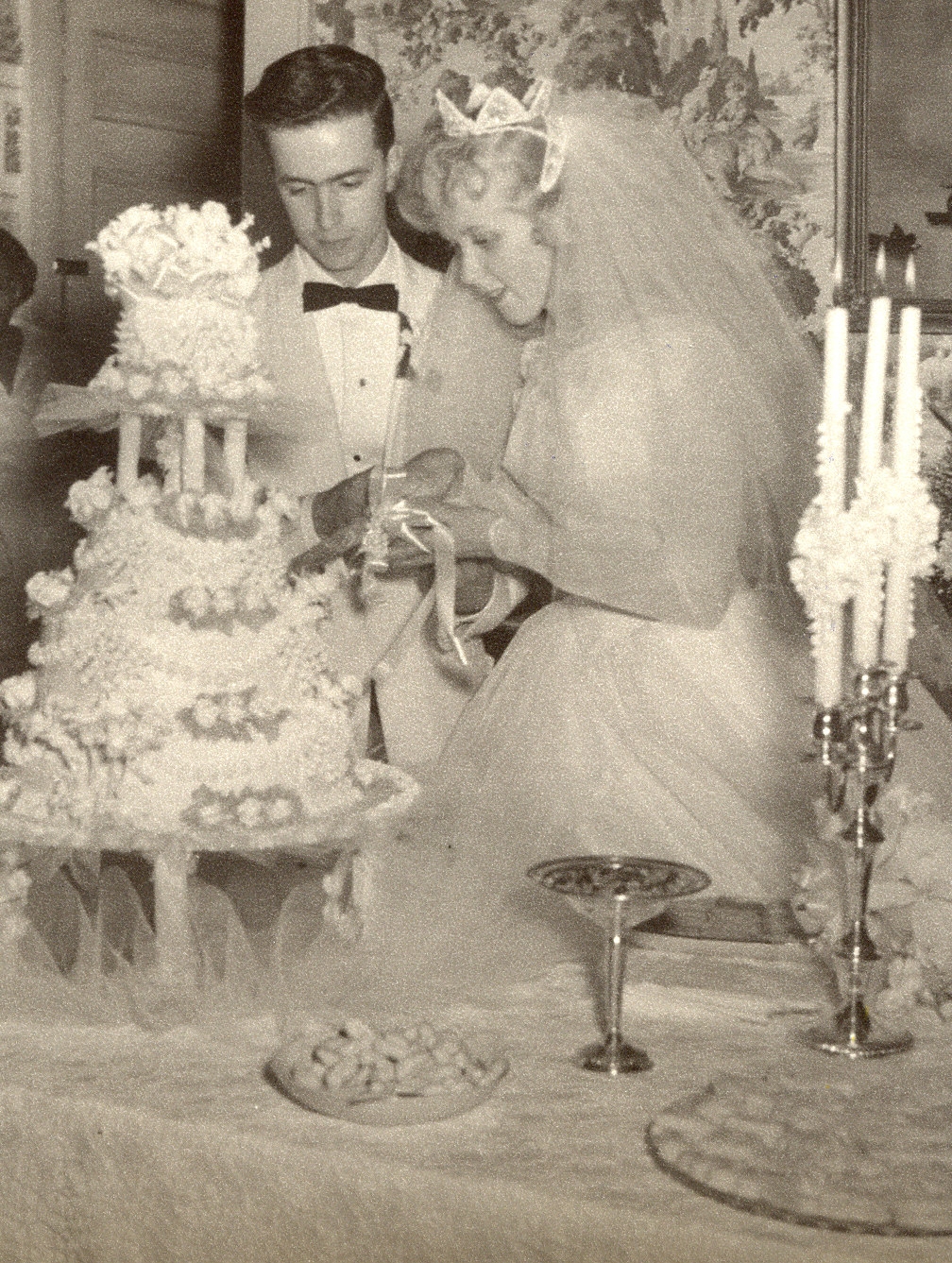 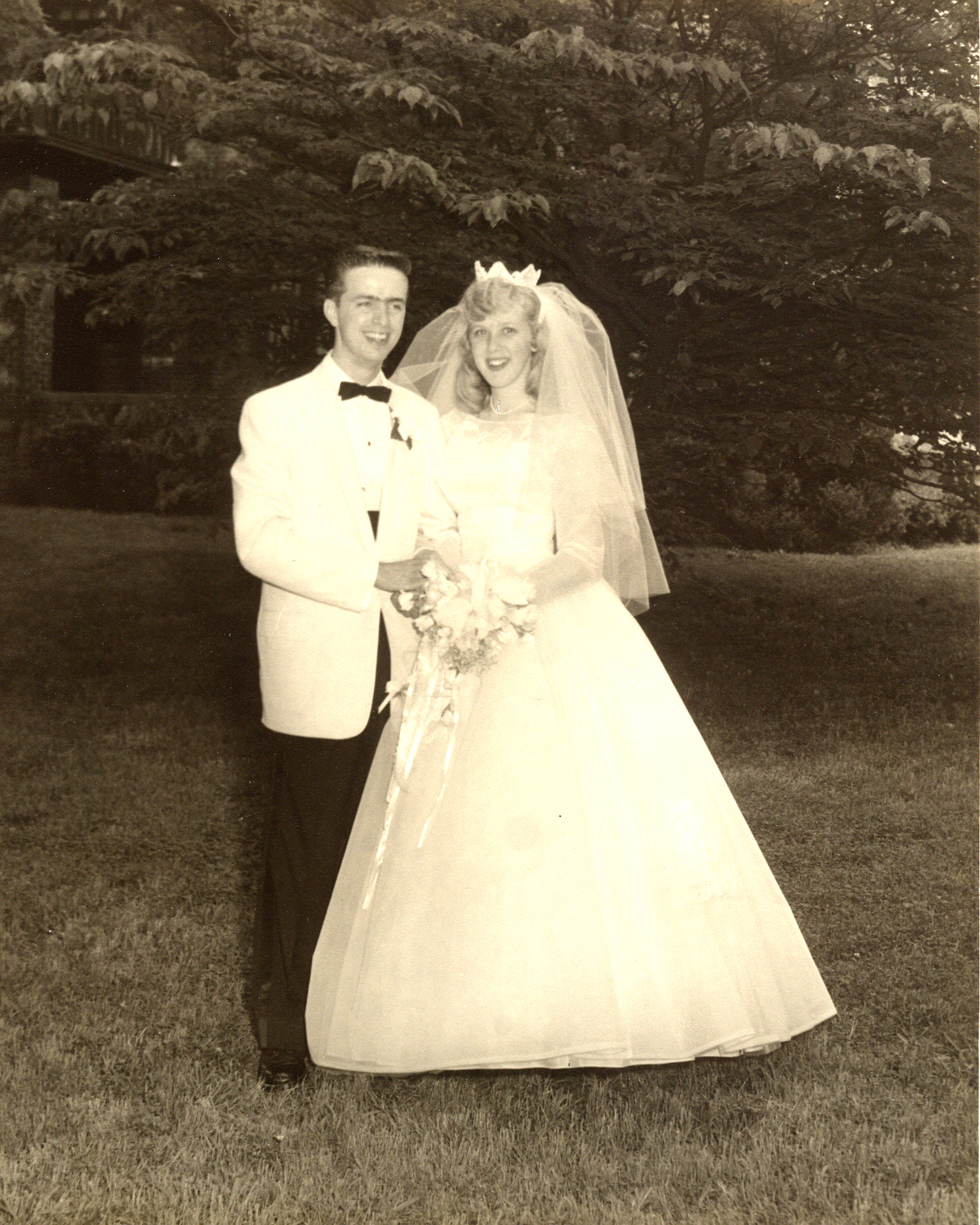 October rolled by, and Ginger had far from forgotten about George. She went to the county fair with a few of her girlfriends one night, and her older brother came up to her saying he needed to show her something. He brought her down to introduce her to none other than George himself! Her brother and George had gone to school together the whole time and no one knew the connection! Ginger’s brother walked her back to her friends, but Ginger knew she HAD to find a way to reconnect with George.

The following Friday, Ginger was coming home from a date, and when she walked in the door, her brother and his wife were sitting on her living room sofa, and sitting next to them was George! They asked her if she’d like to join them for a late night breakfast at the diner, and from that point on George and Ginger were the sweetest pair! 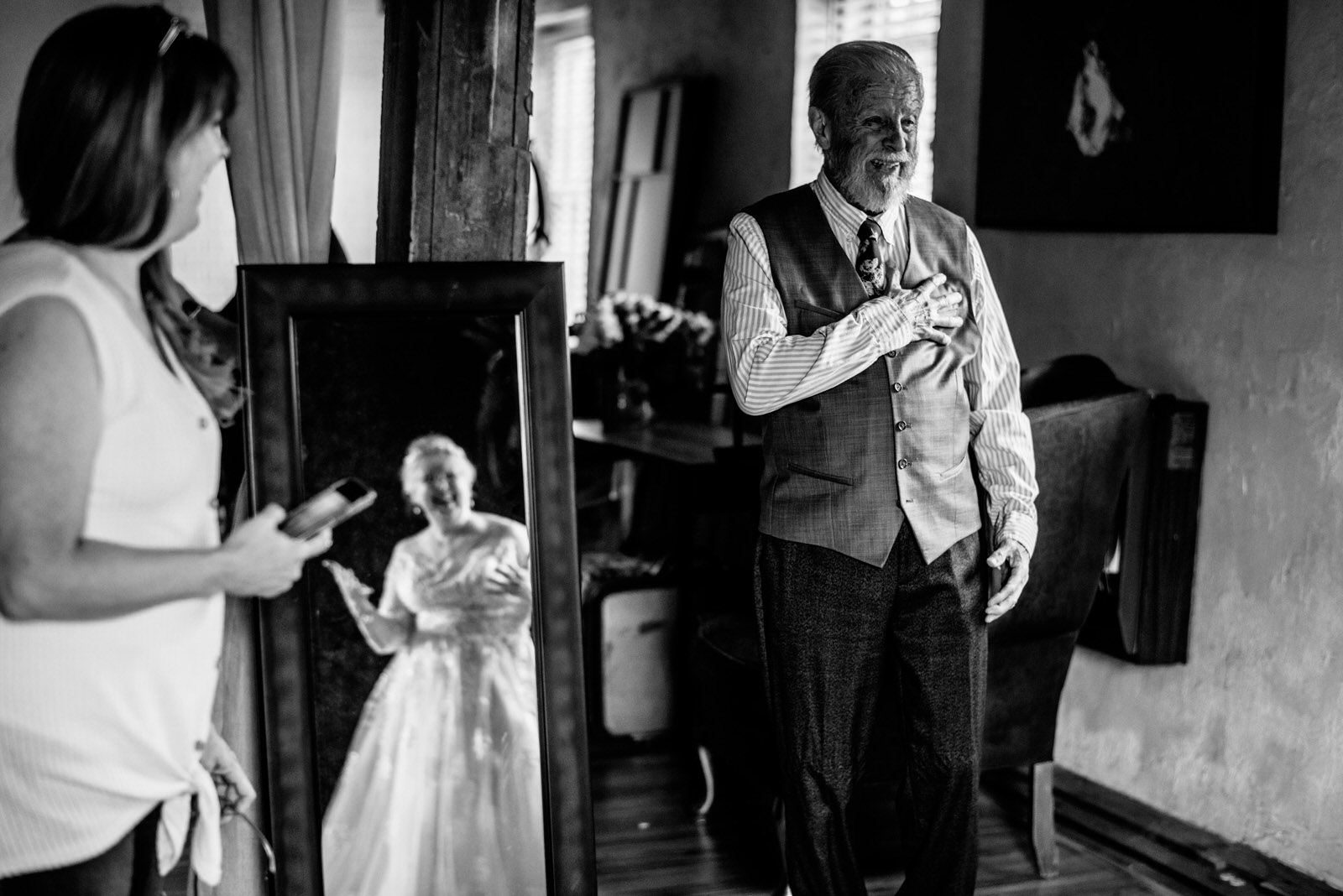 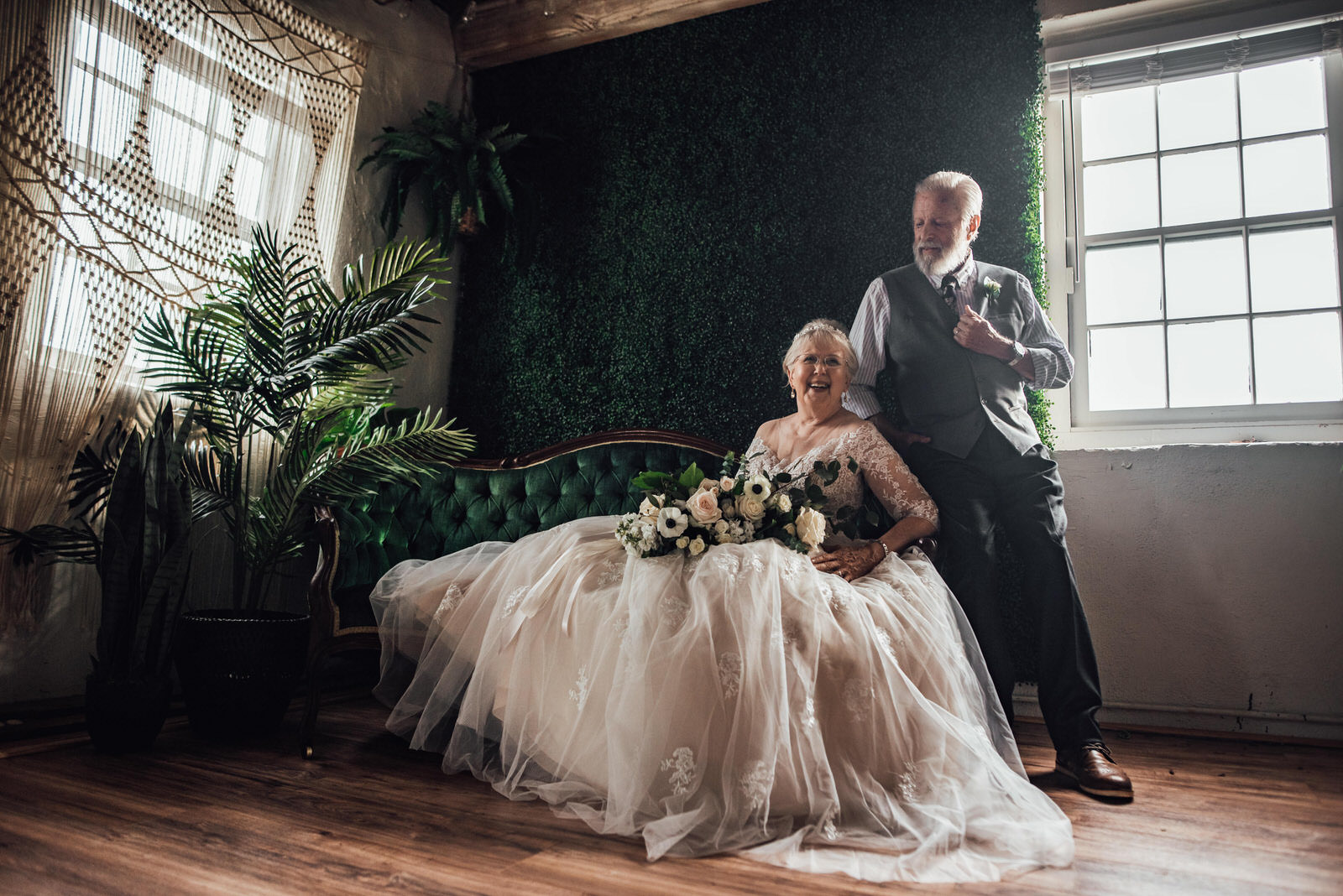 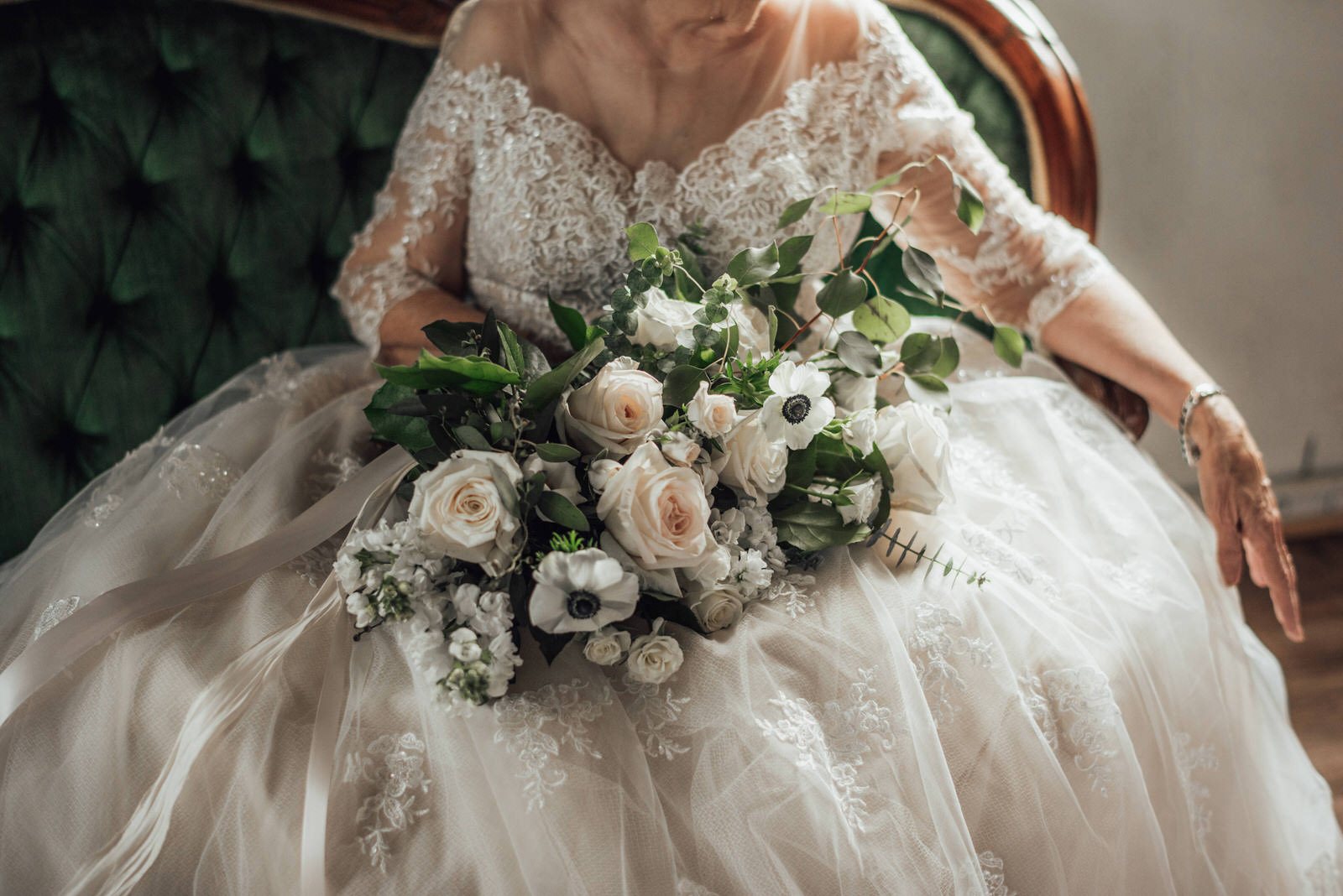 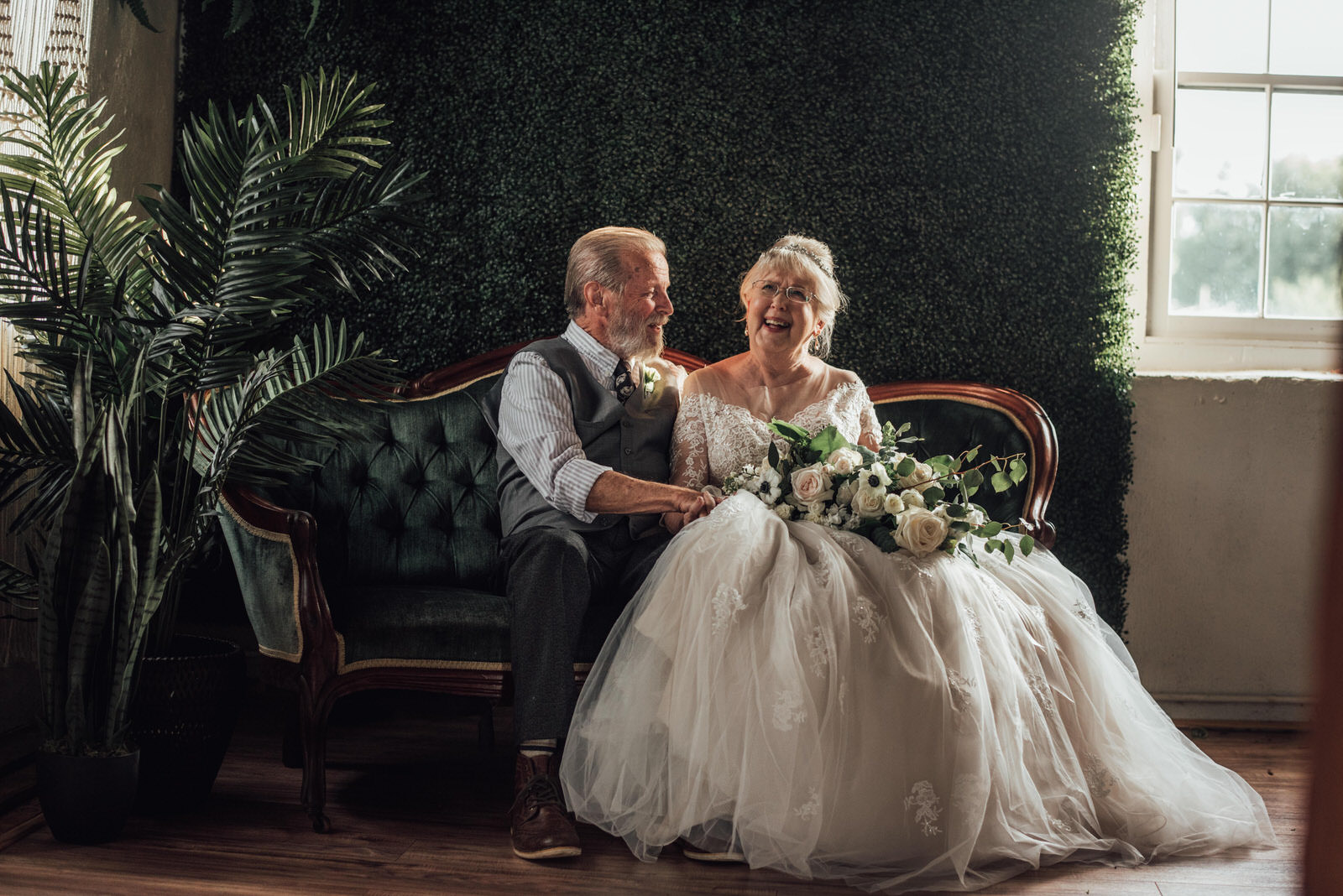 Not long after, they decided they belonged together, and on June 6th, 1959, exactly one year and four days from the day they first met at the Simple Simon Restaurant, they were married! They didn’t quite know it yet, but the rest would a big beautiful history, full of children and grand children and even GREAT grand children! There were hands being held and messy days and enough laughter to fill five lifetimes! They have filled peoples’ lives with love and still do each day, and they wouldn’t have it any other way!

Flash forward 60 years, 4 kids, 18 grandkids, and 19 great- grandkids later, Ginger and George now go by all that follow; Mom and Dad, Grandmom and Granddad, and Long Grandmom and Long Grandad (affectionately coined by the great grand kids, since they live a “long drive away” in South Carolina!) They celebrate their 60th wedding anniversary, so the family chips in and flies them up for a visit in our very own New Jersey! We knew we had to do something special, because (and I may be biased) they ARE the best grandparents ever!

We contacted some of our vendor friends, including the ladies at Bridal Suite Boutique, Ivy On Main Florals, and Christine Swope (who provided not only hair and makeup, but a hair cut and style for Granddad too!) Everyone pulled together to get all the details for their very own 60th anniversary shoot!

We have compiled a 78 page guide just for you that lays out what you should expect from us as your wedding photographers as well as some great tips and tricks to planning your perfect wedding as it relates to everything photography! 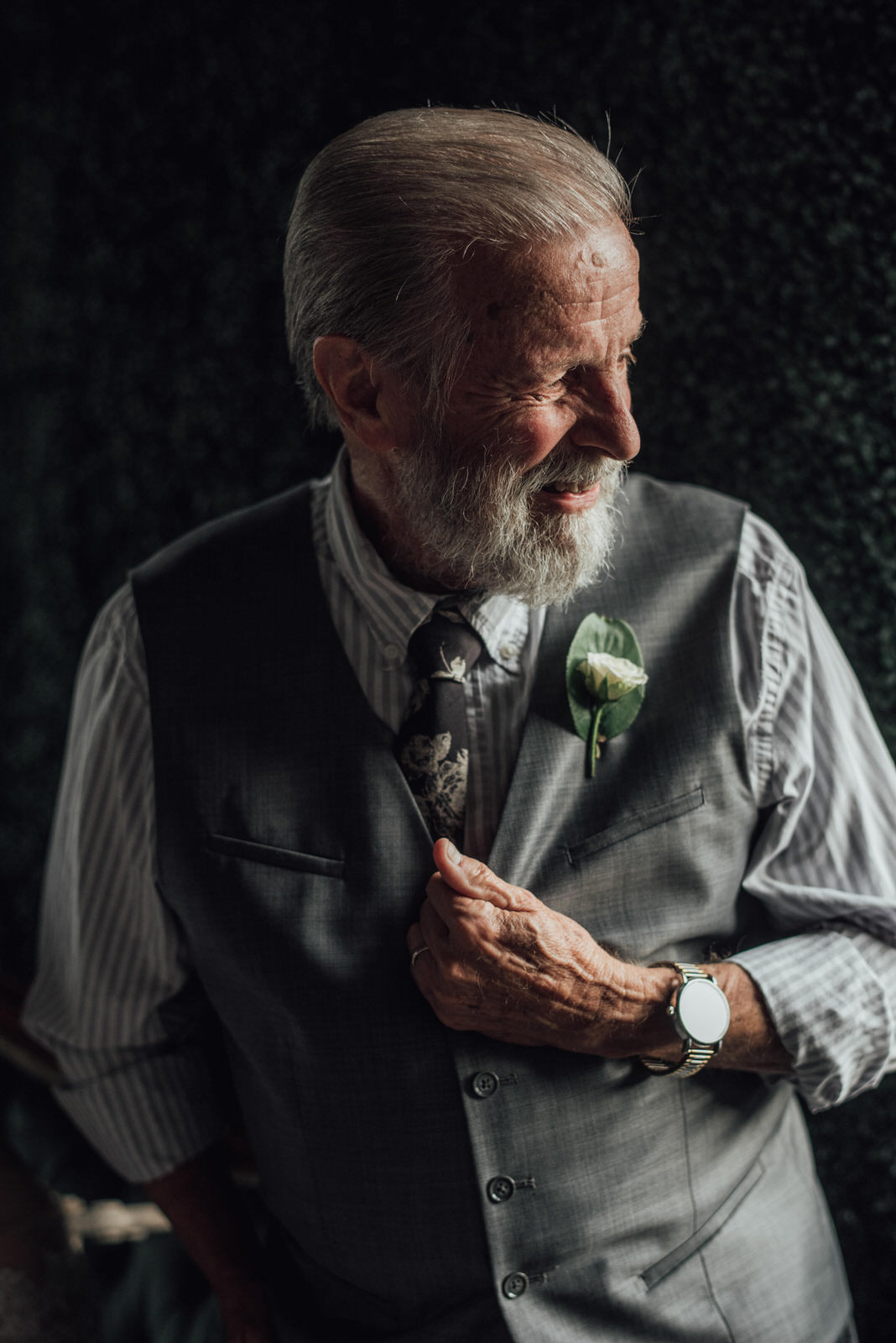 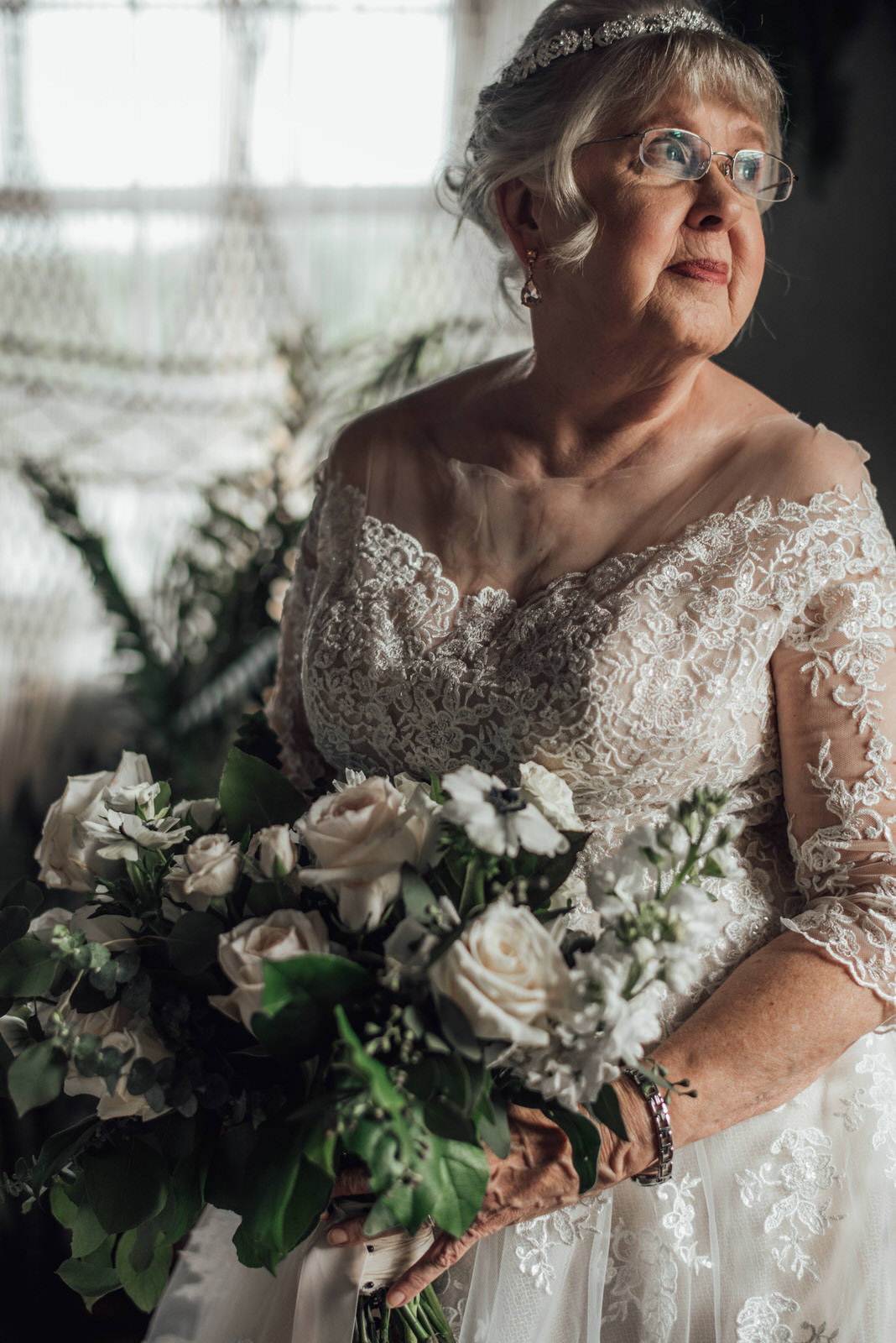 Grandmom was more nervous than anyone, she had never gotten any kind of professional hair and makeup done let alone fancy pictures, so we had to reassure her that she was going to rock this thing! Granddad wasn’t quite as nervous (and if he was he didn’t let on), and he was cracking jokes the whole time in typical George Brown fashion! We dressed him up into one of Andy’s suits (because amazingly, they are the same exact size in everything), and he looked SUUUUPER dapper!

Once we zipped Grandmom into her dress and stood her in front of the mirror, it seemed like some of her nerves were relieved! So we brought Granddad into our studio for a little “first look”, which was sweet as anything. We snapped some elegant photos on one of our sofas before heading out back behind the mill! With the old buildings and the little forest by the creek, we had quite a few charming places to photograph them by, and they have such natural chemistry together that it wasn’t hard to catch a lot of sweet moments! 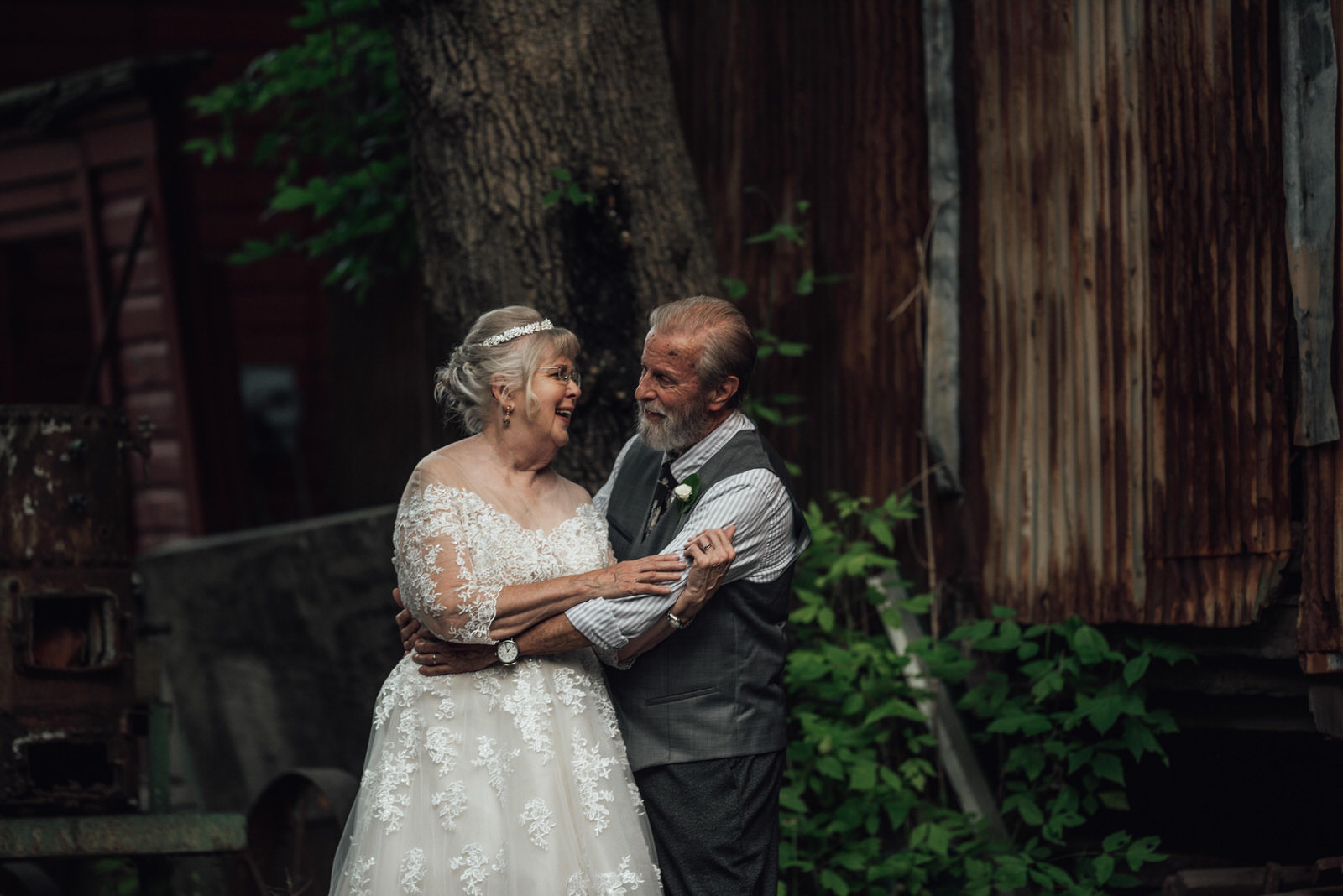 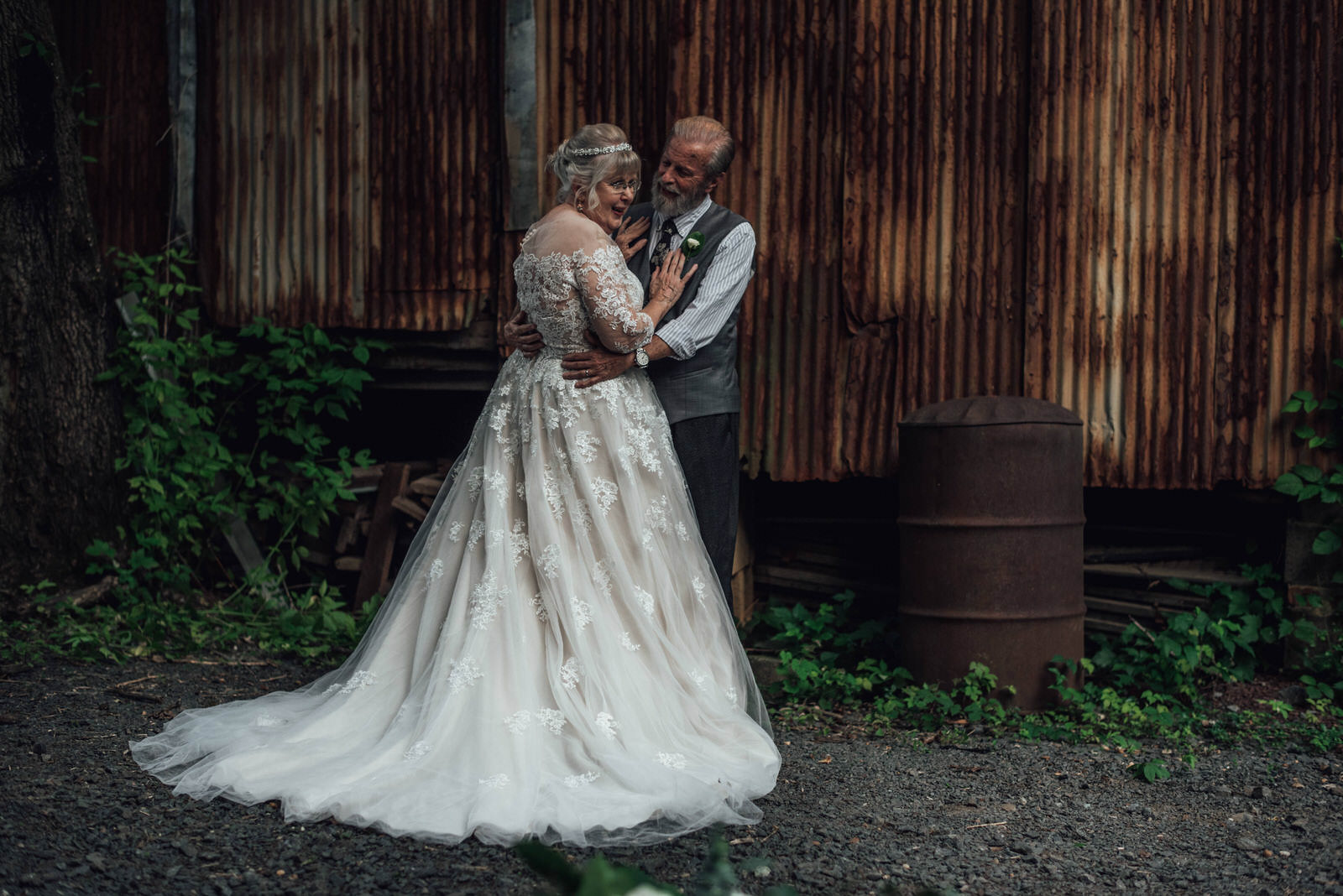 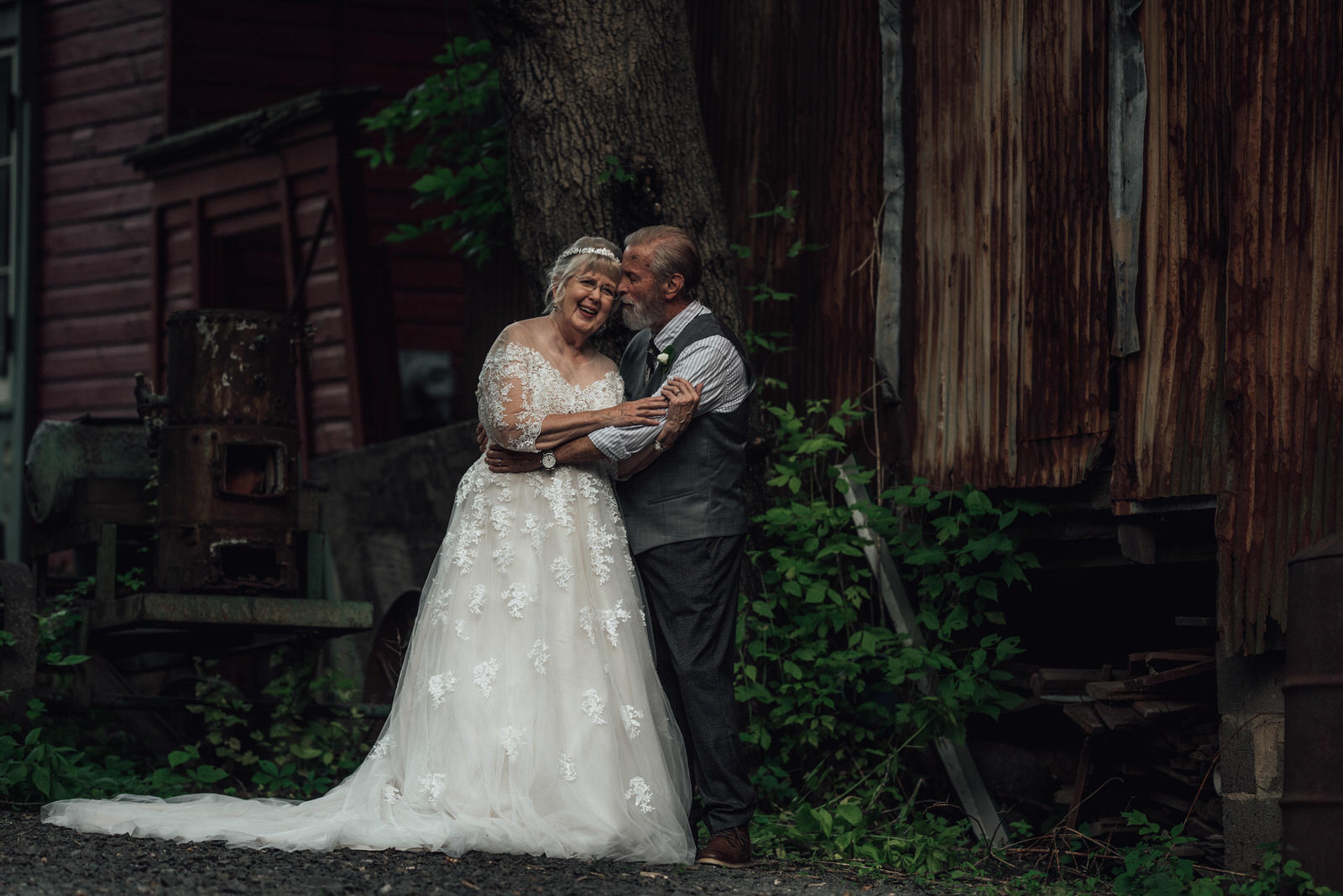 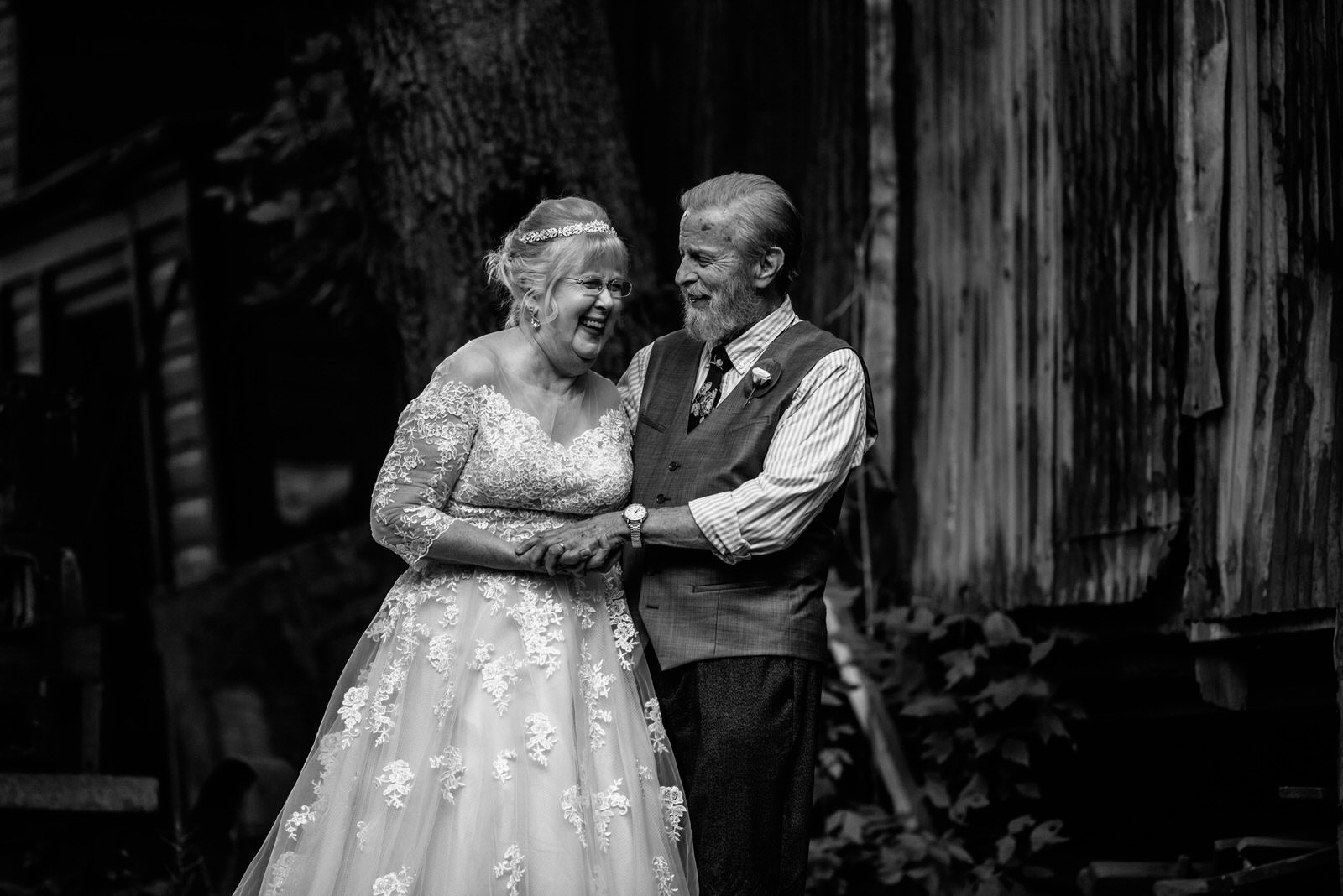 Almost the entirety of the shoot consisted of Granddad cracking jokes, which would in turn cause Grandmom to break out in laughter. She would usually return with a coy comment as Granddad gave her a kiss on the cheek!

As we talked and laughed with them, we asked them if they had any advice for young married people, to which they replied; 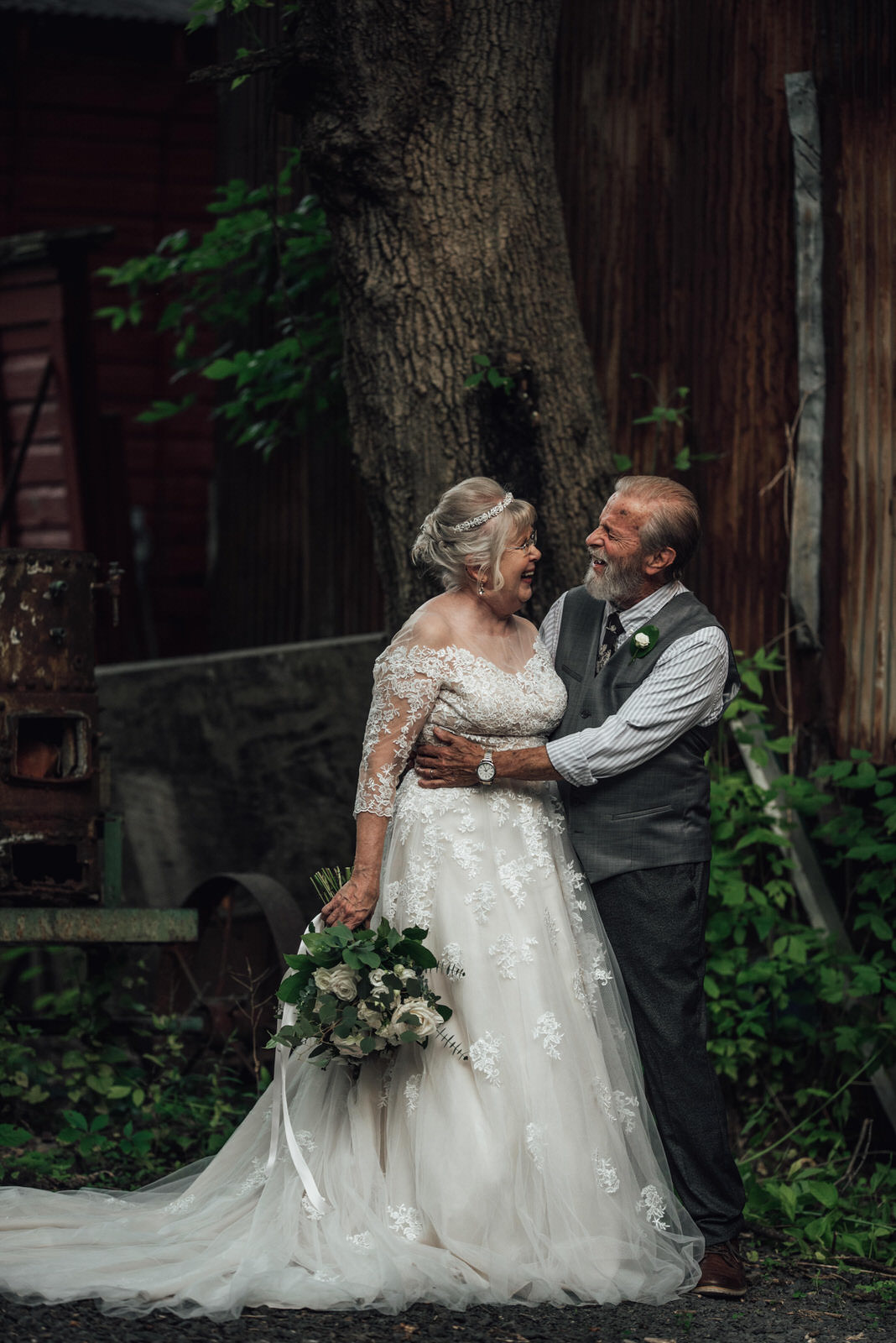 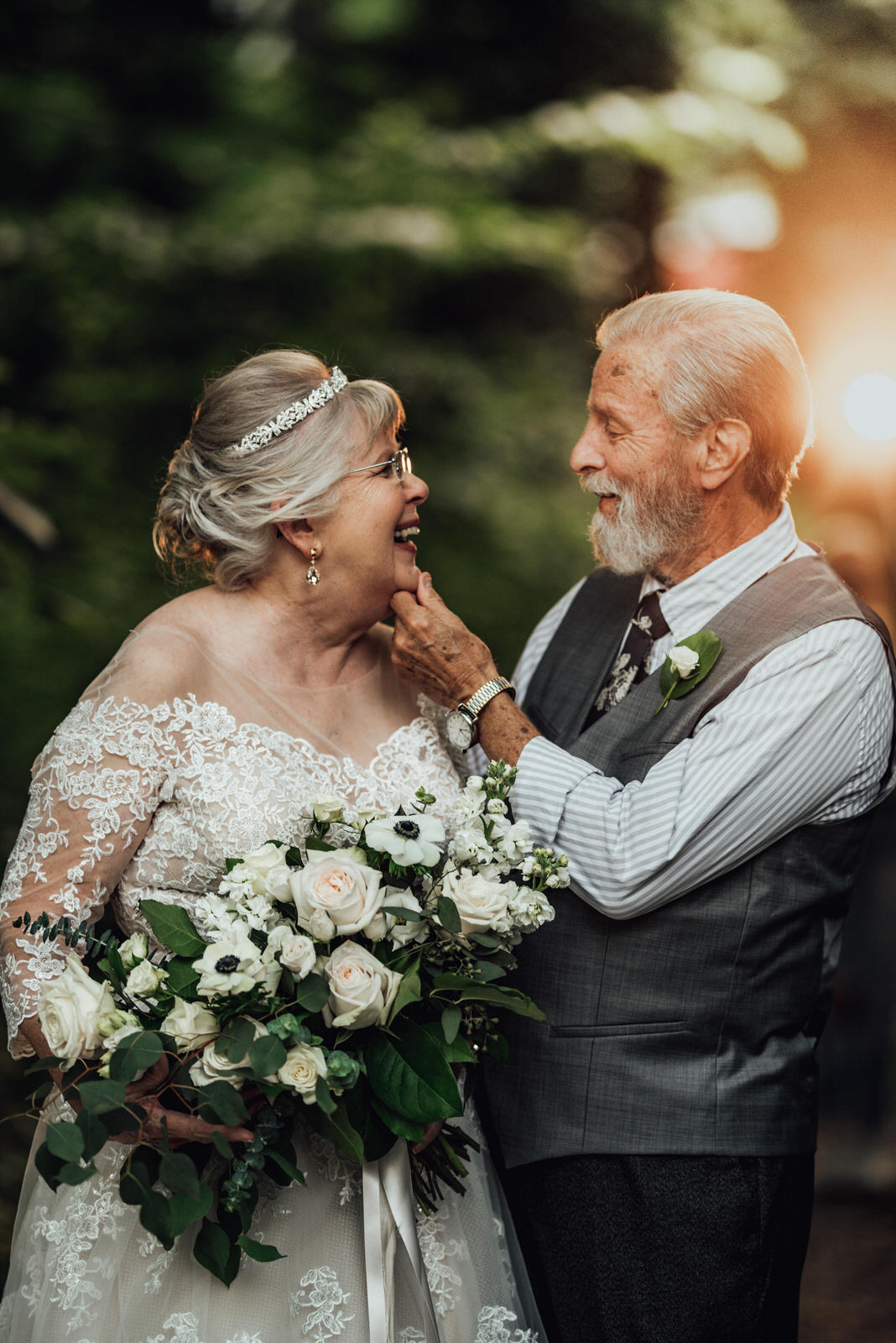 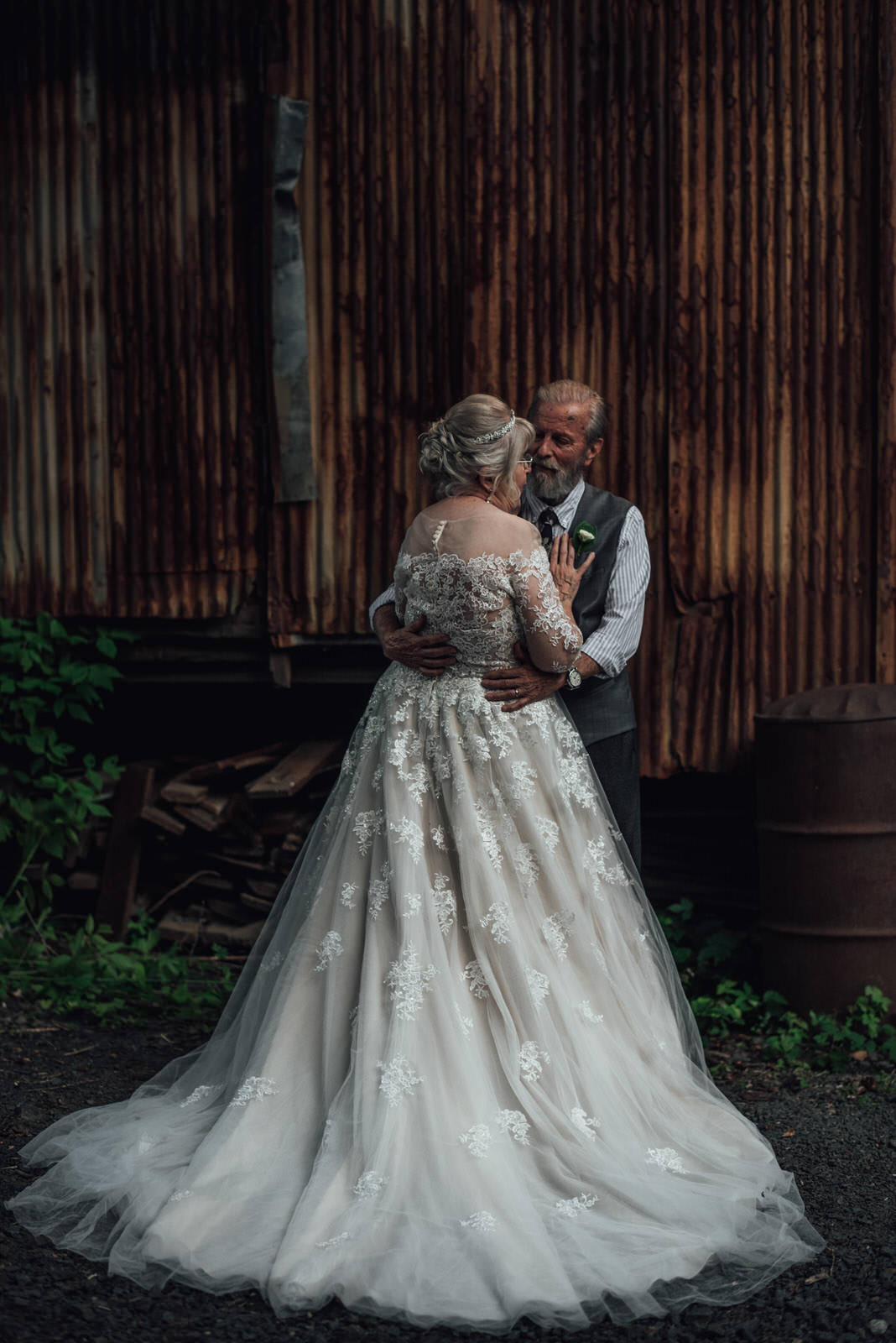 All in all, it was a beautiful little shoot! We ended the night by getting ice cream in town and hanging out! It was such a joyful day, full of giggles and just plain cuteness, and I am so thankful to have spent all the time we did with them!

Gmom and Gdad, we love you to the moon and back! We adore your stories and life lessons, and we have always loved the memories you have built into our lives! We are so thankful for all that you do, and we hope you never stop laughing and holding hands and “kissing once a day or more”! You truly are the best Grandparents anyone could ask for (and yes, I am biased, because how could I not be?) We love you!!!!!!

As photographers, our primary purpose is to capture the love, intimacy and the legacy of our clients. To be able to capture and share the story and those photos is the reason we get up in the morning.

So when you consider your wedding photographer, consider these things: 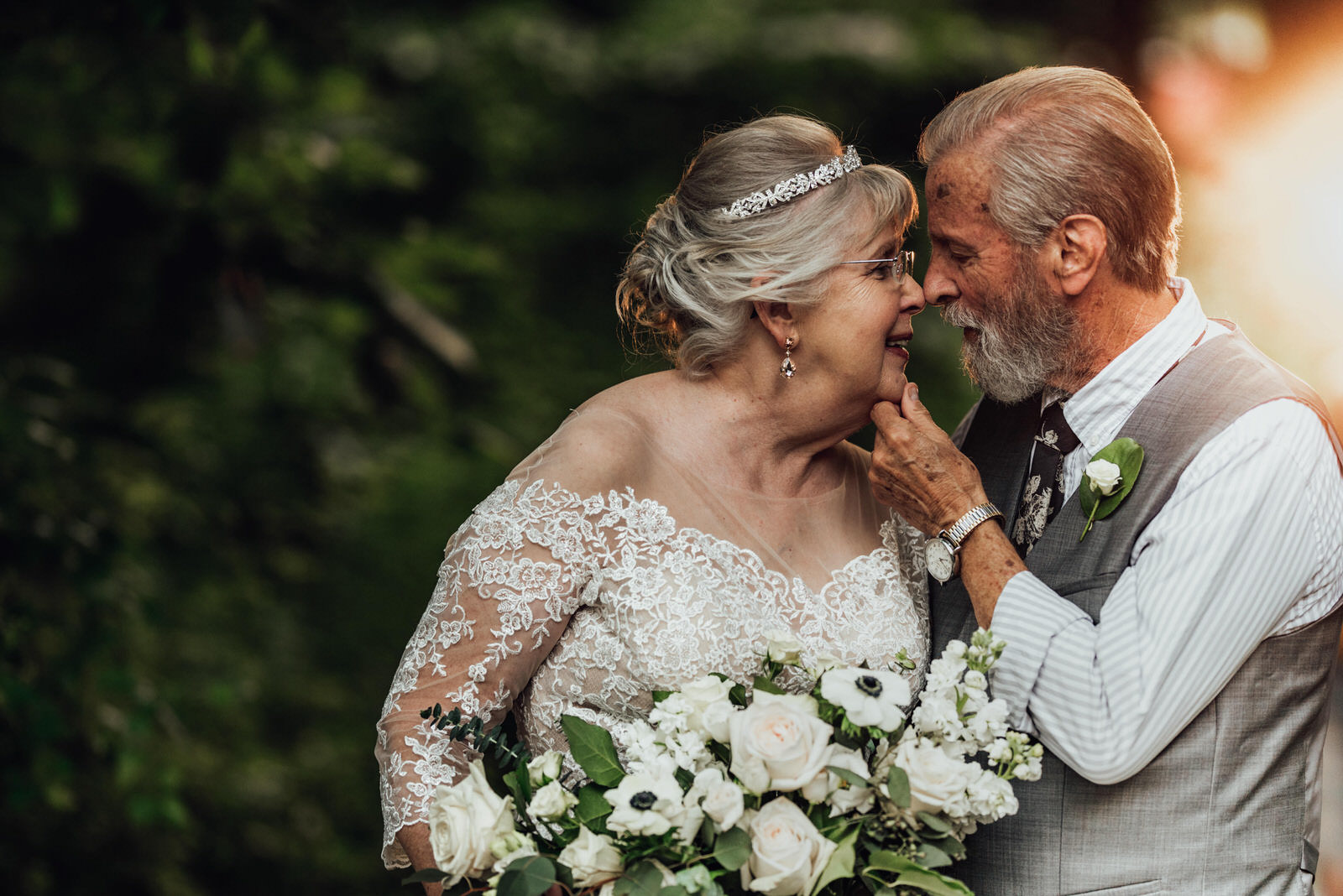 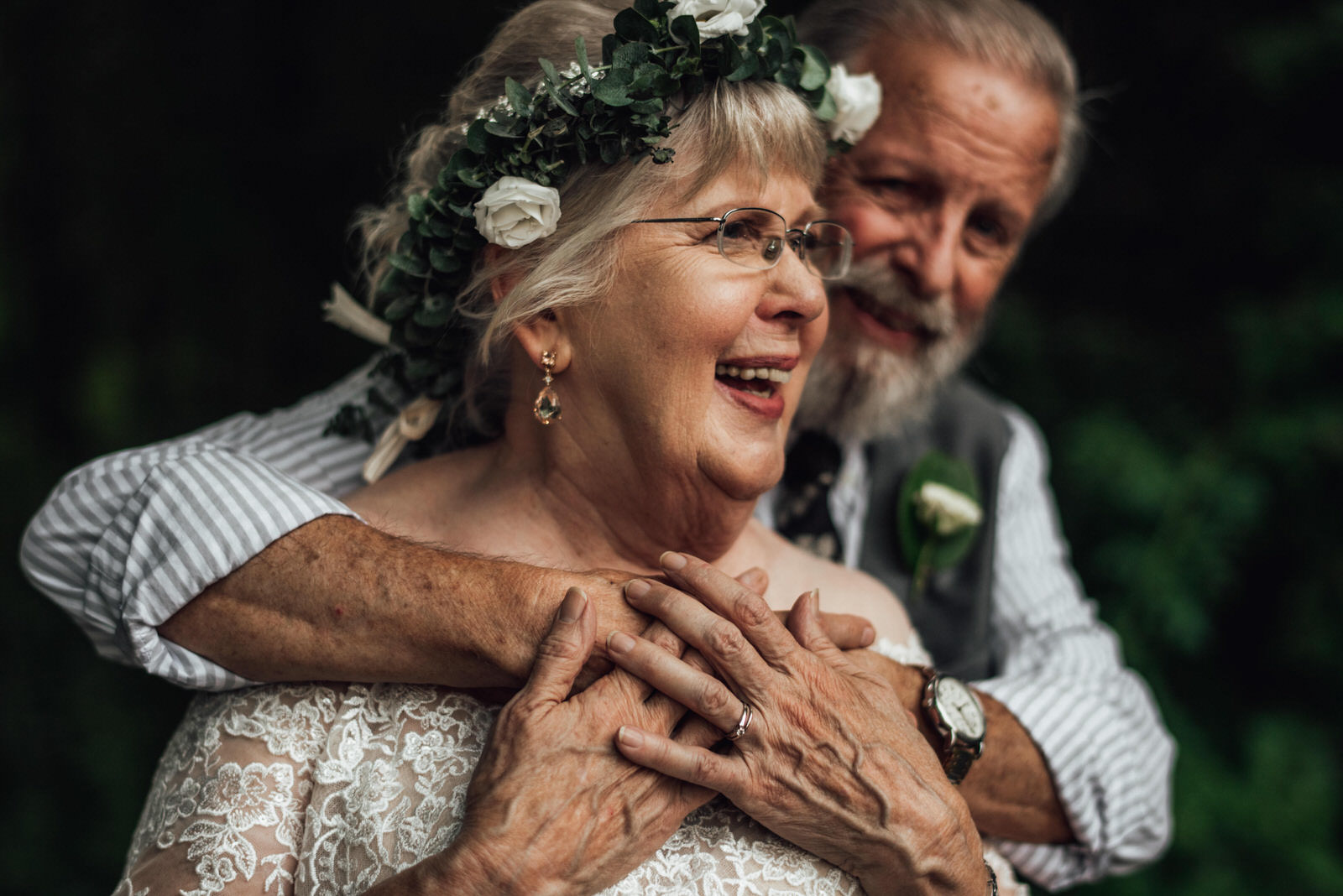 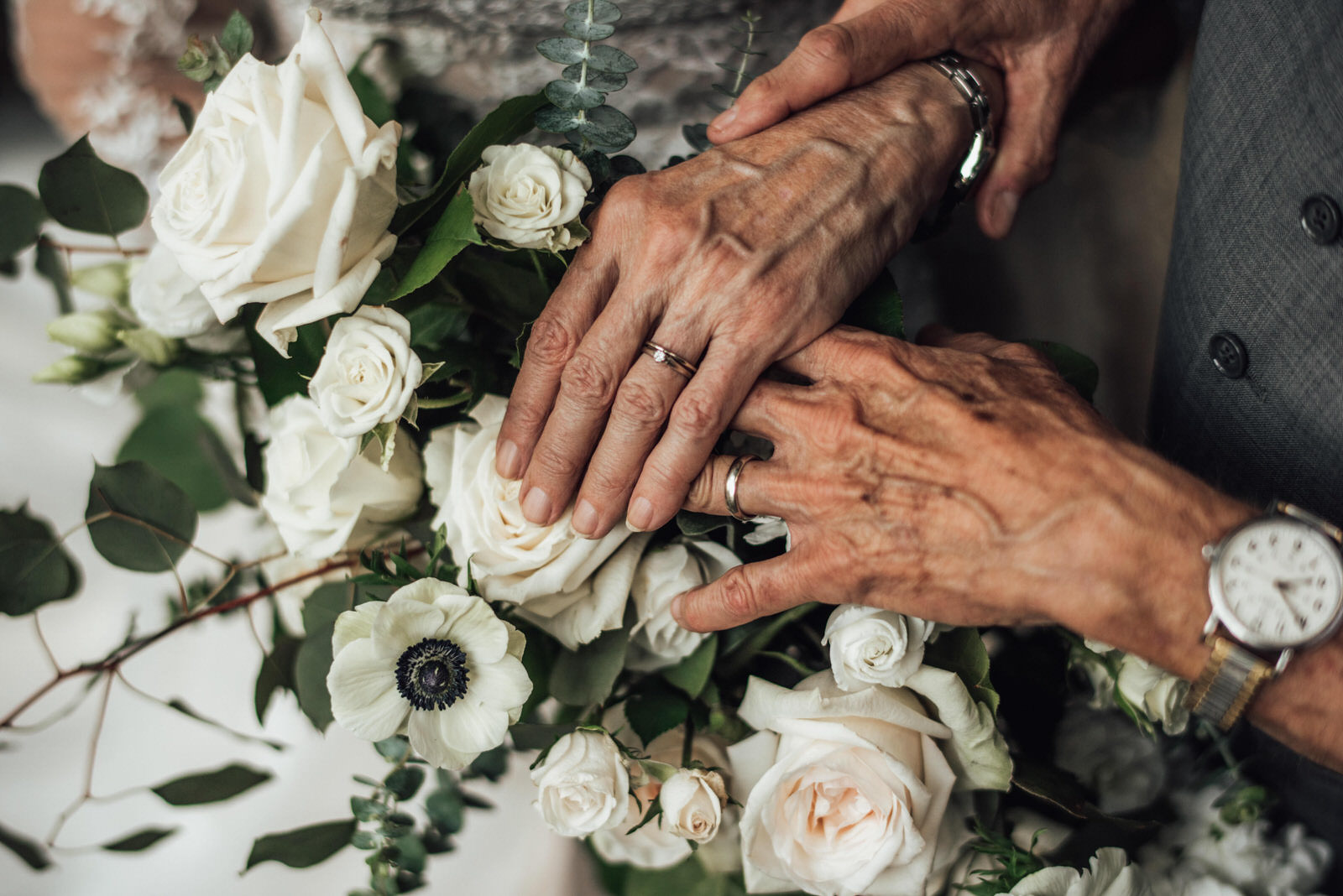 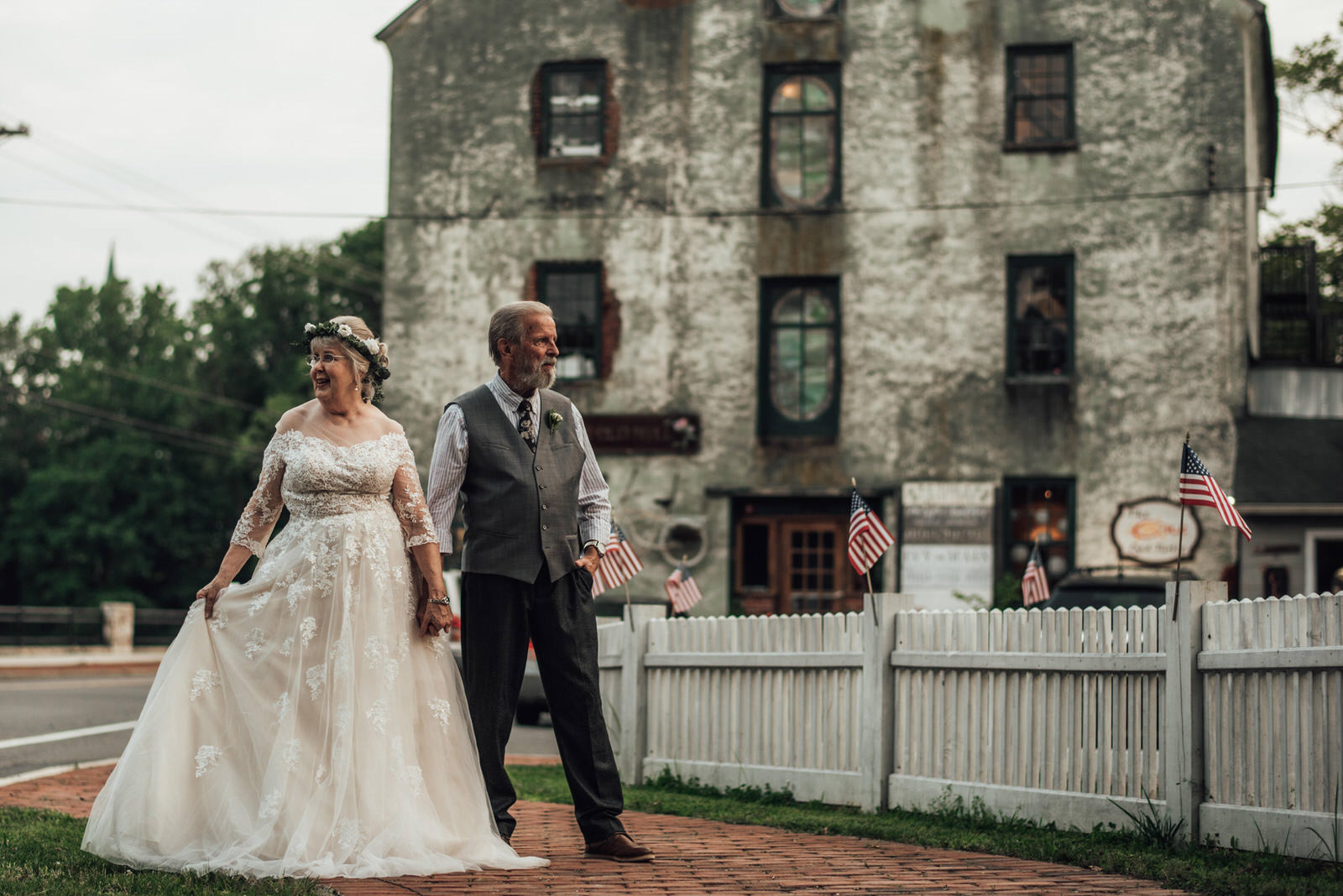 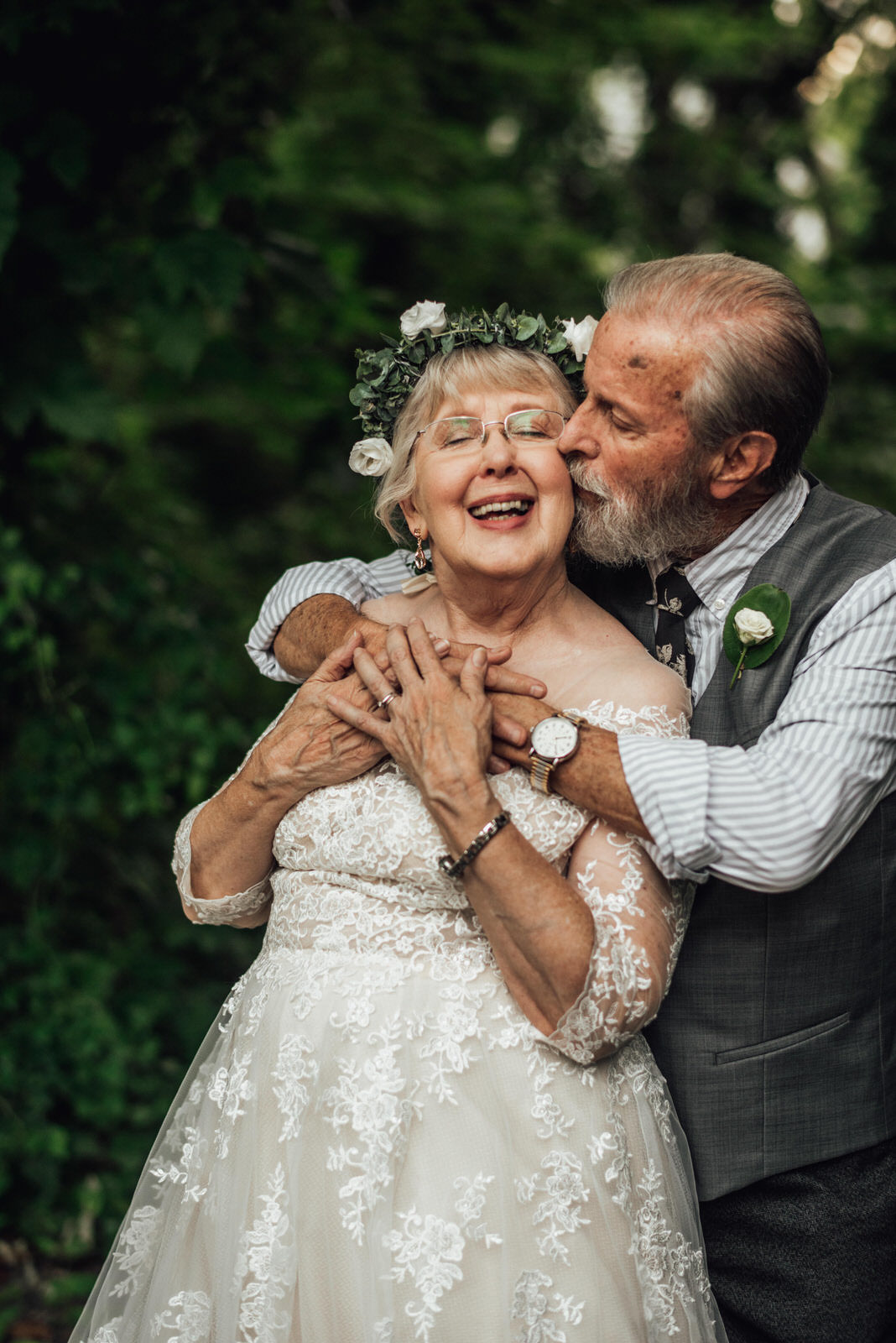 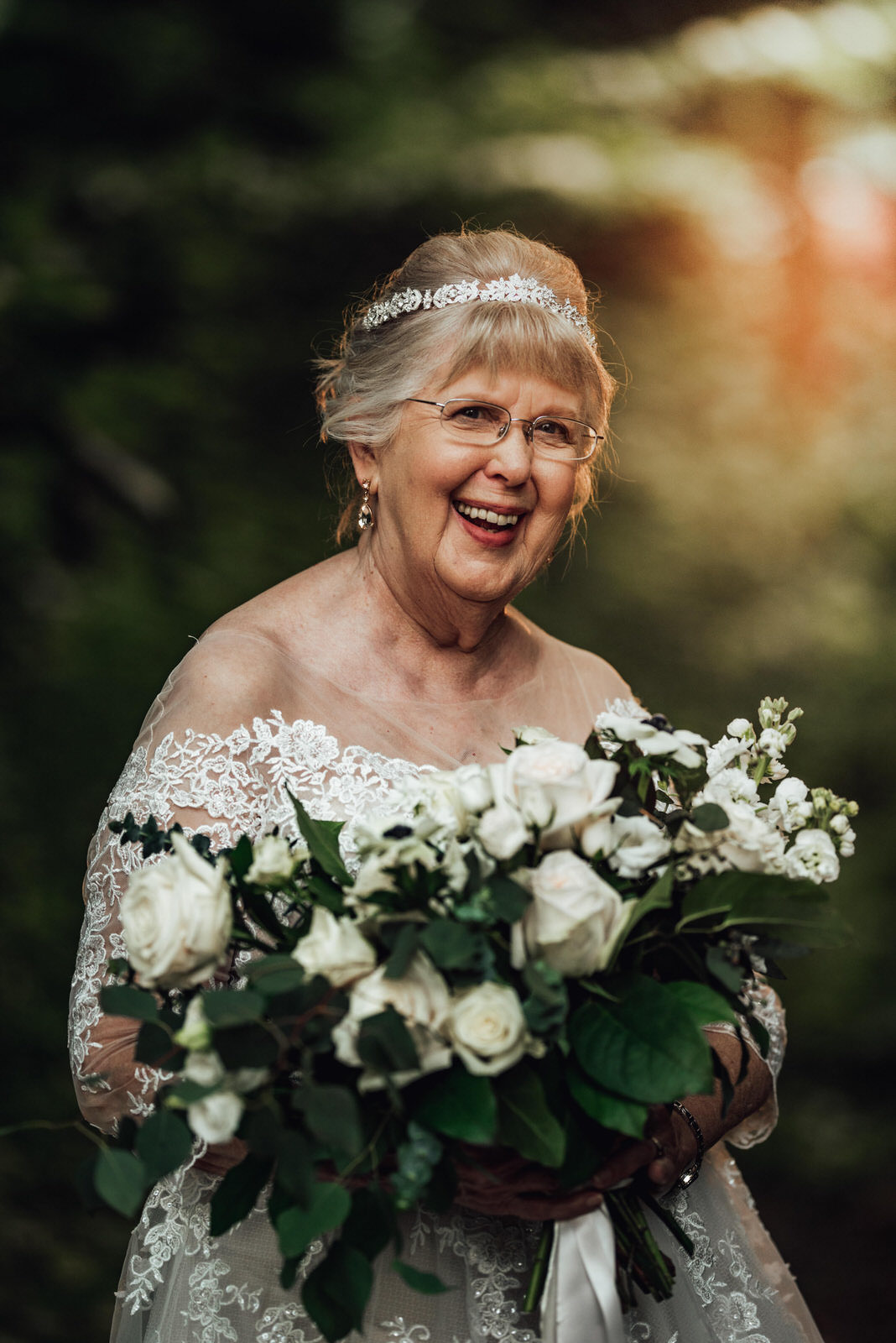 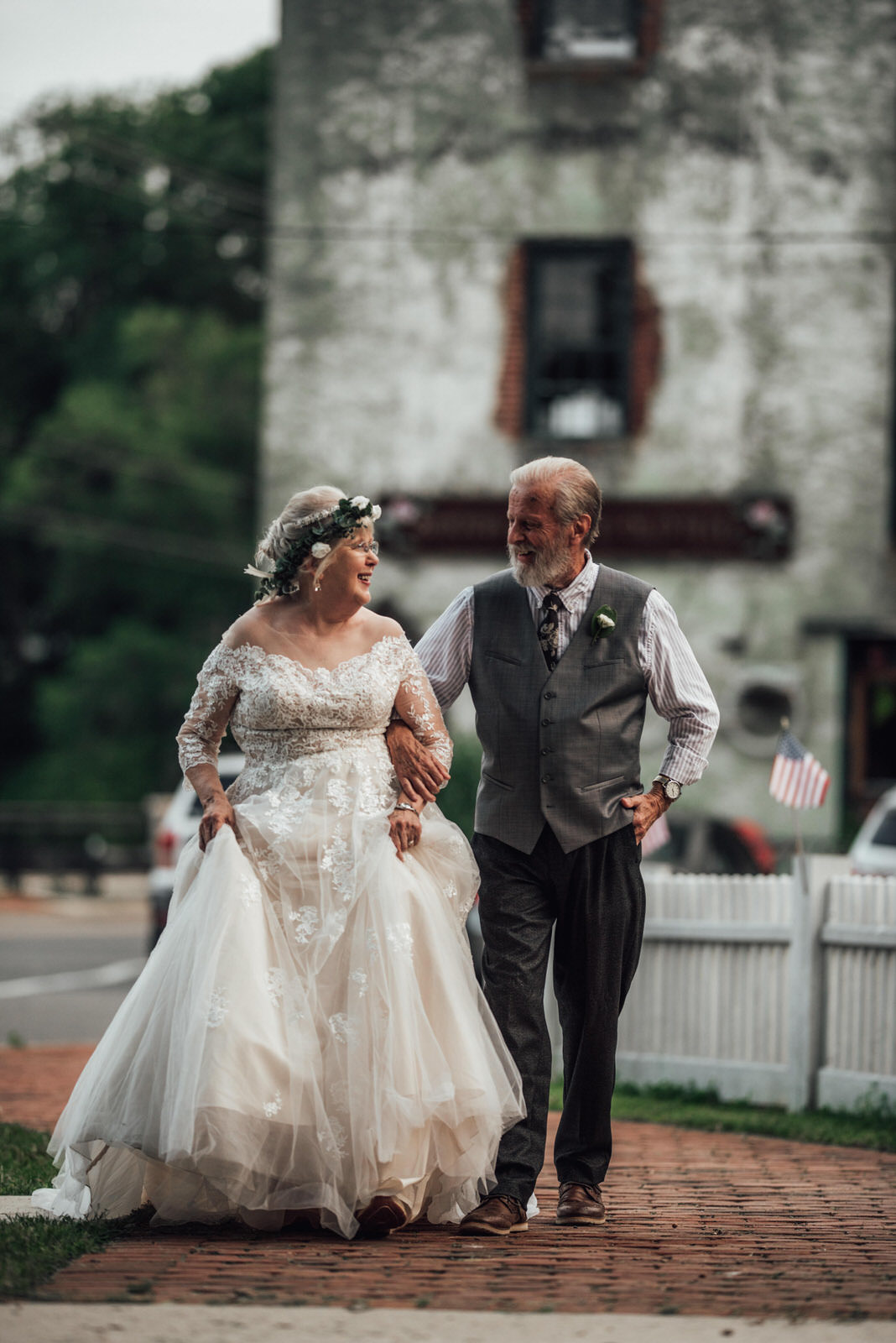 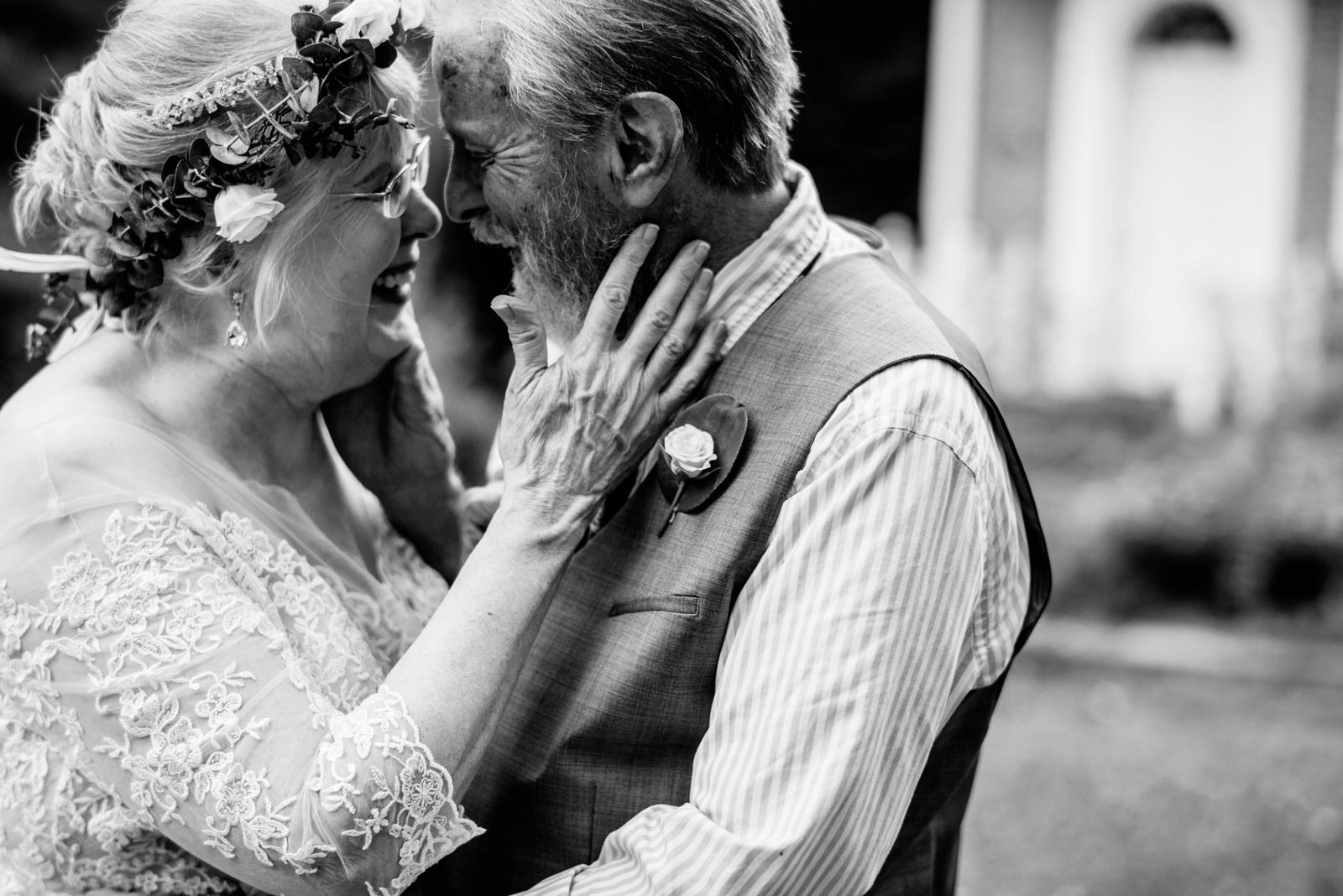 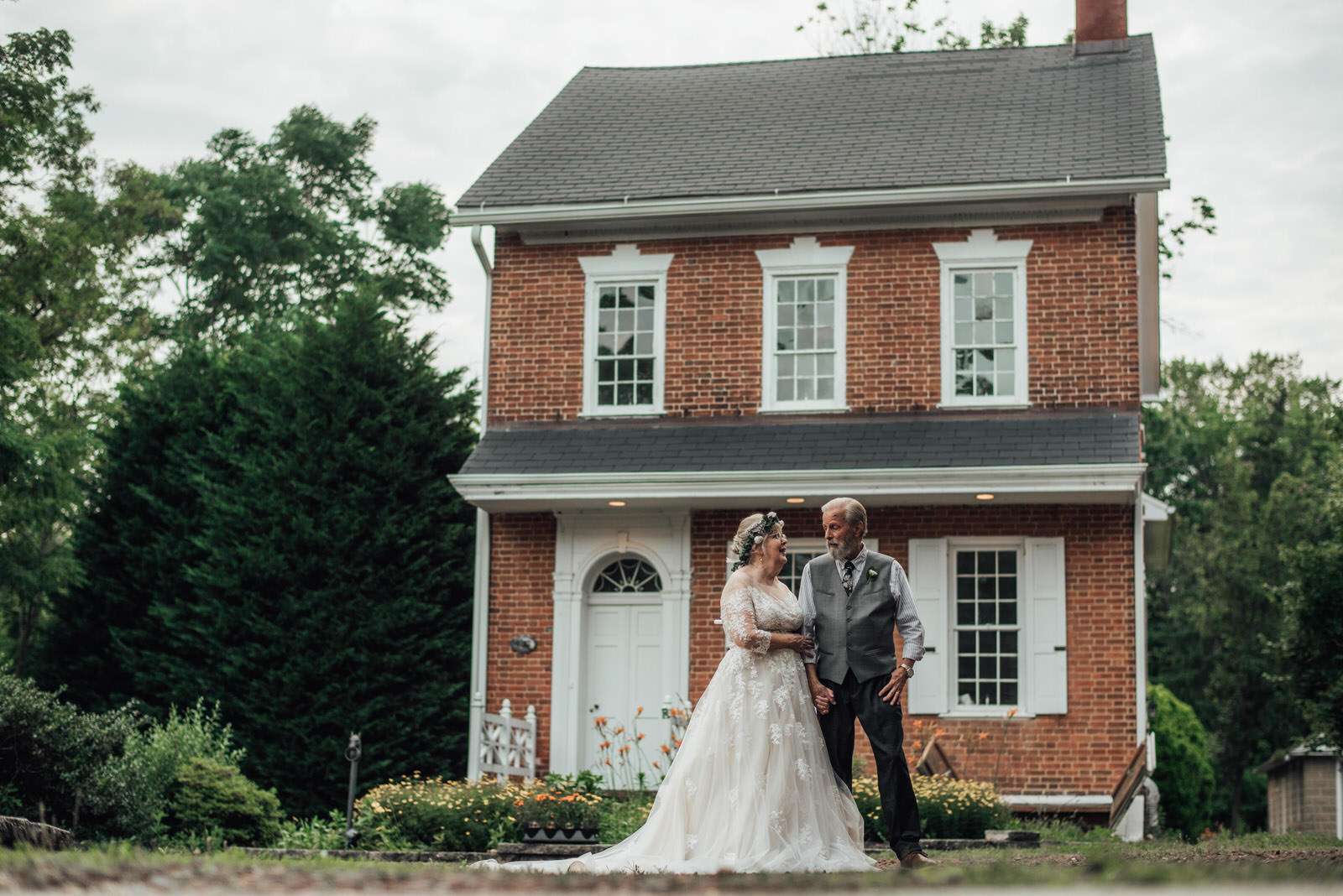 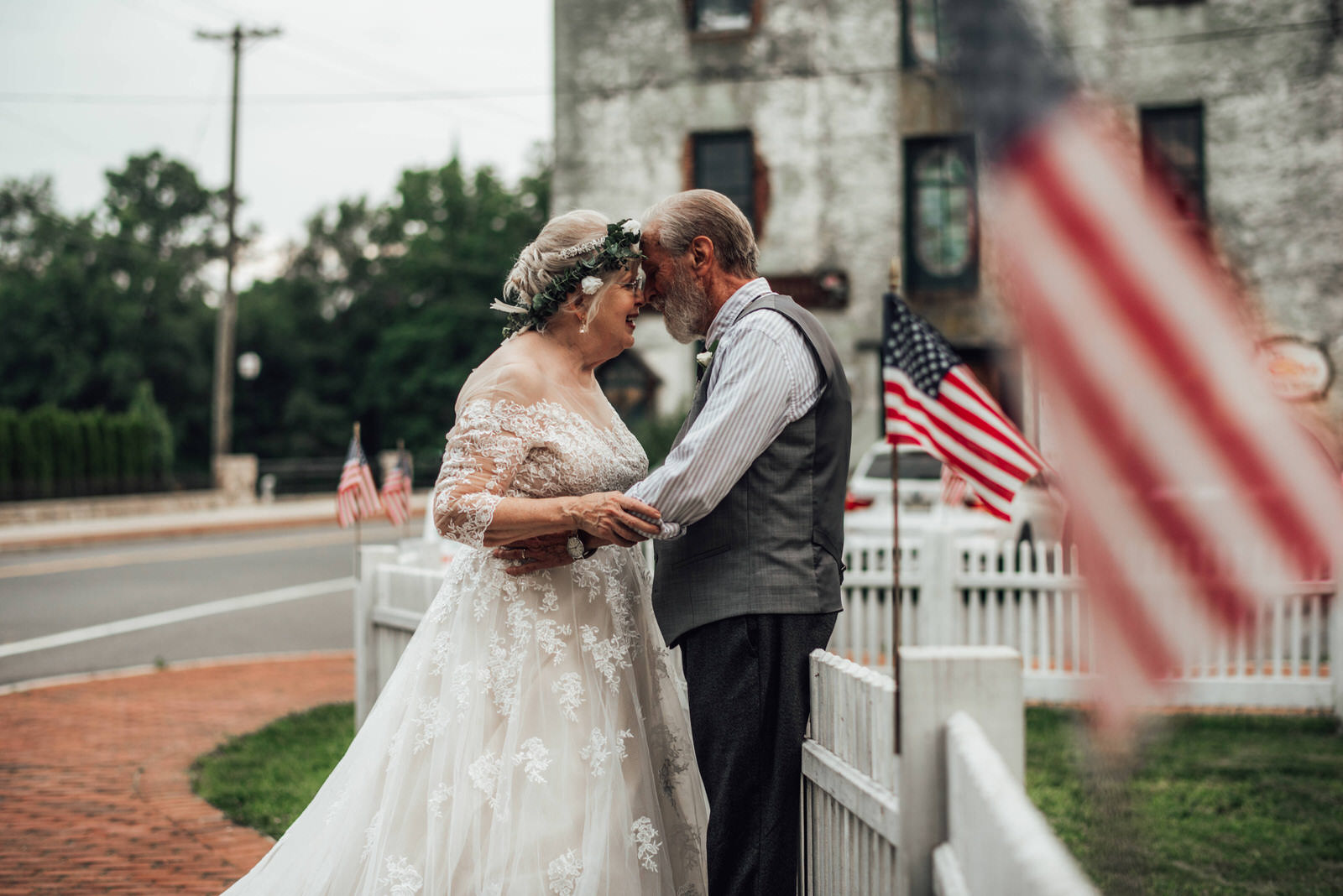 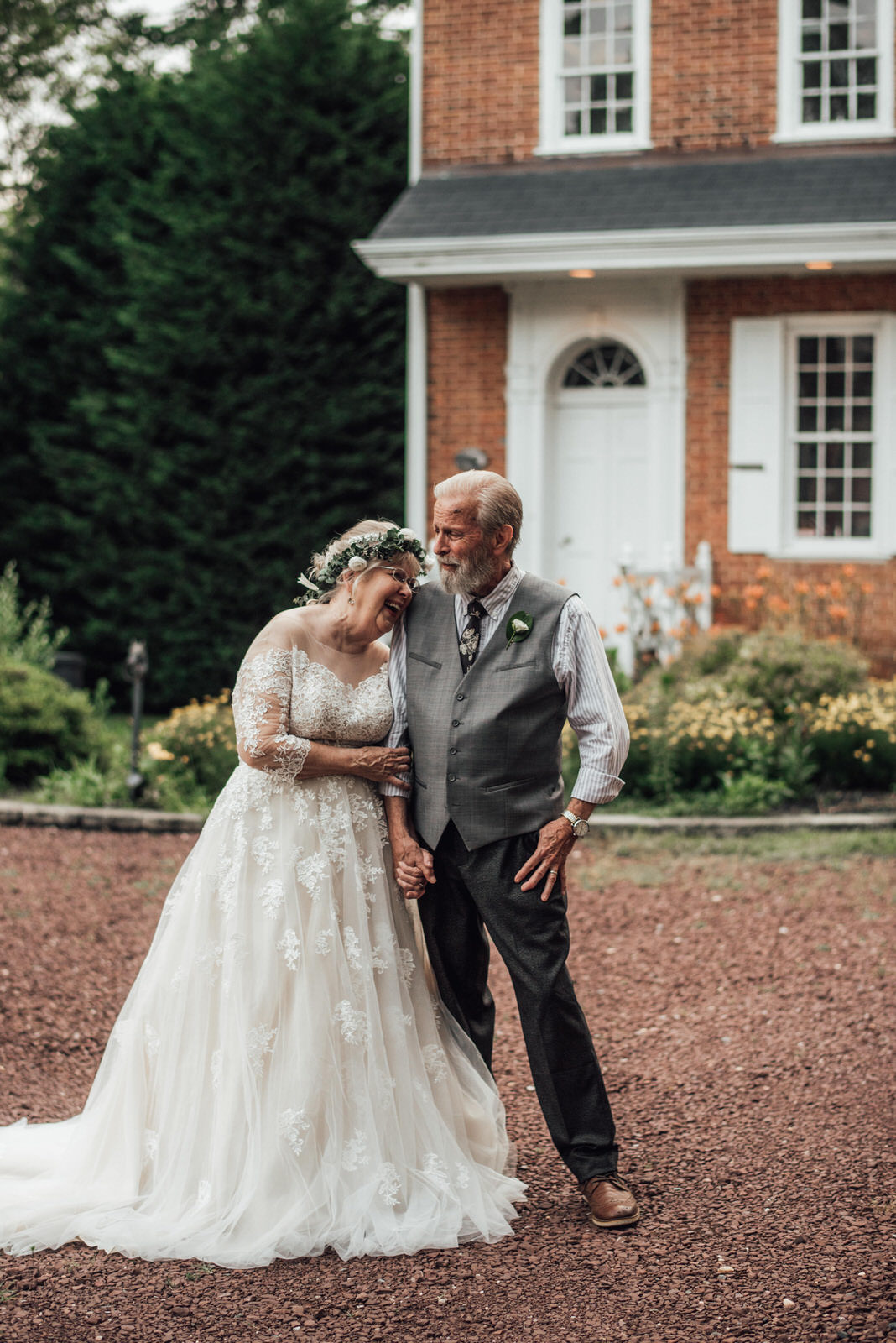 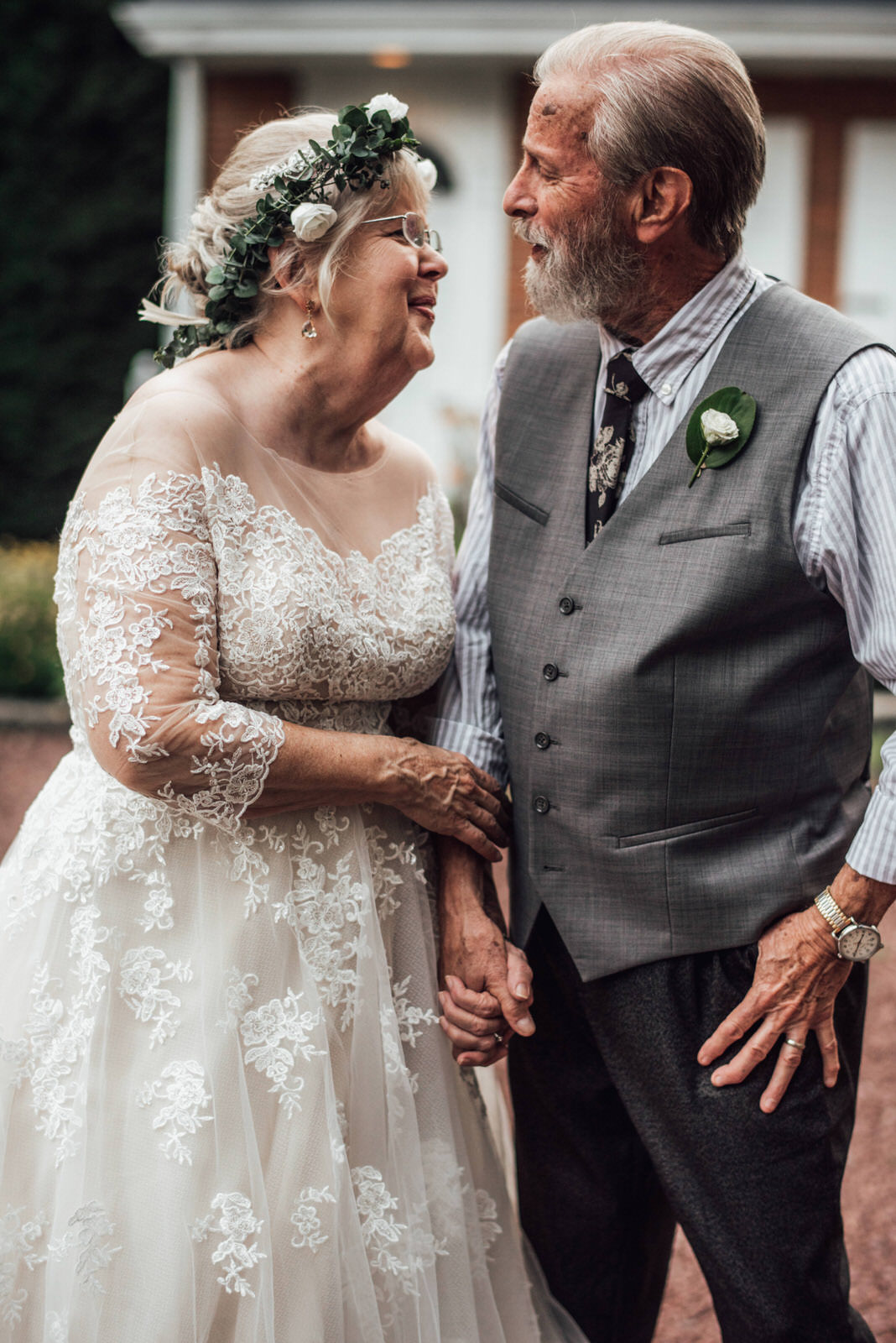 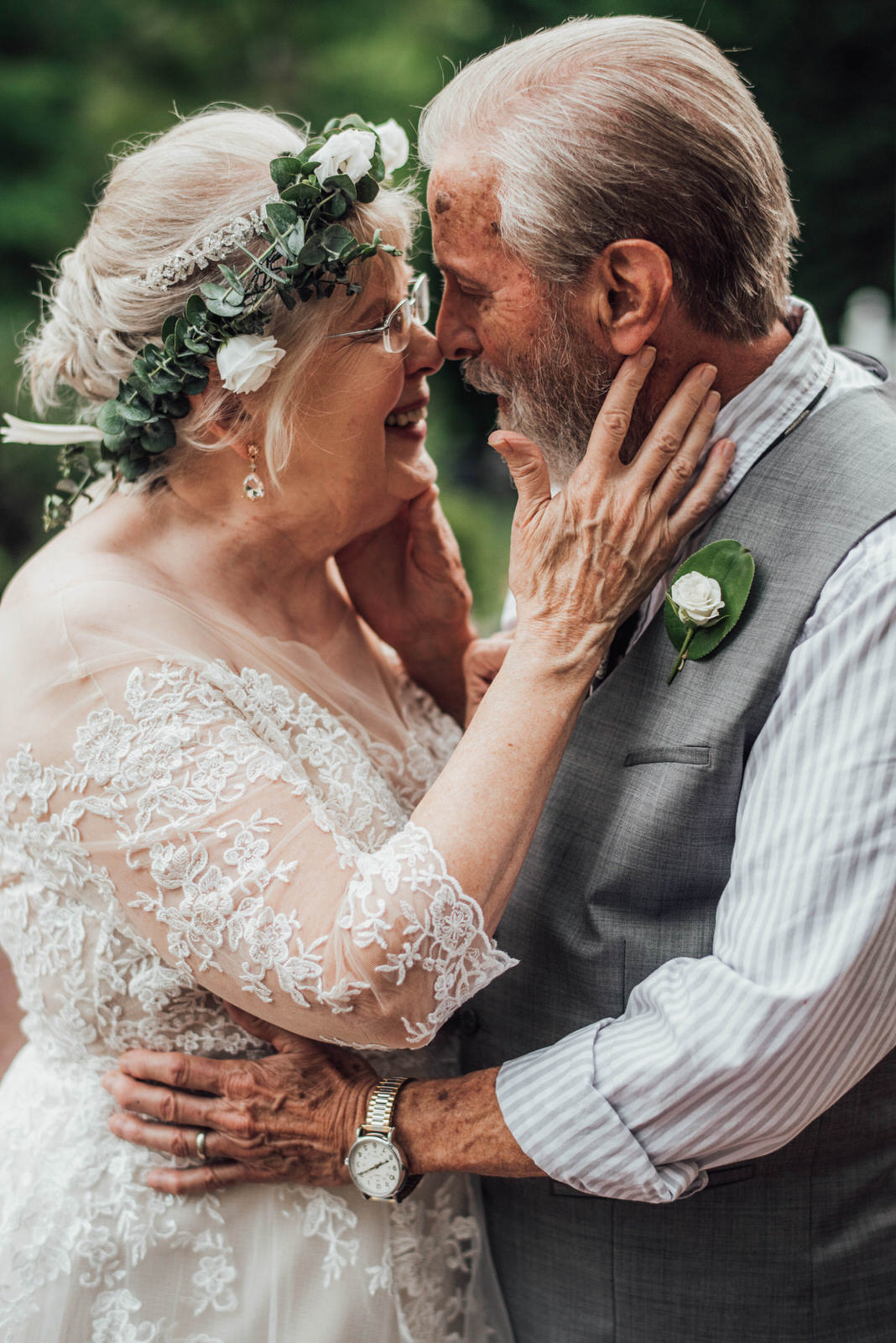 Thank you to our amazing vendors for your contribution!

Fill out the form below to get more info about our wedding collections!